On April 10, the Beaches Democratic Club at South Beach Parkway Community Center, Jacksonville Beach, honored hometown Tallahassee resident grew up at the Beaches, was Miss Fletcher 1978, and is now chairwoman of the Florida Democratic Party. The former lobbyist has been active in party political campaigns as a fundraiser, and chairwoman of the Leon County Democratic Executive Committee.

“It’s a great time to be a Democrat; we’re fighting battles on a lot of fronts,” club presidentPeyton Hopkins said, filling in time before Tant arrived with a humorous talk poking fun at the opposing party and himself. In his fourth term as club president, he joked, “That doesn’t mean you should hold me in high esteem. I bring ice and sodas and get here early to set up chairs.” Hopkins introduced VIPs among the 70 guests, including Neptune Beach Mayor Harriet Pruette, Jacksonville Beach councilman Keith Doherty, and Schulz Center executive director Deborah Gianoulis Heald, as well as Democratic party officials from Duval and St. Johns counties, including Ponte Vedra Club President Barbara Haugen;Travis Bridges, past president of the Duval County Democratic Party; Annette Cappella, St. Johns County state committee woman; Nell Toensmann, St. Johns County chairwoman; andNeil Henrichsen, Duval County executive committee chairman. Henrichsen introduced Tant saying, “Allison is strong; has come out of the gate pulling the party together.”

On that note, Tant said the party is being regionalized into North, Central and South Florida segments. “This next election year is a game changer,” she said. “We have to keep our gains and go after a few more. We’re calling this a gubernatorial year. We don’t want to call it an off-election year.”

The Beaches Club meets at 6:30 p.m., the third Tuesday of each month at the Jacksonville Branch Library, Neptune Beach. Go to www.duvaldemocrats.org/clubs/beaches-democratic-club, or call (904) 401-4790 for info. 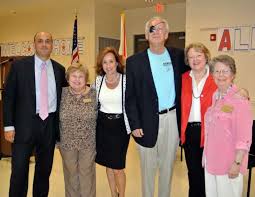