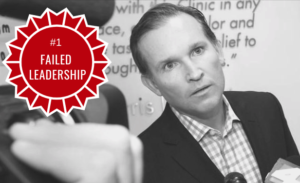 Last week, our party membership unanimously passed a resolution opposing the re-election of Lenny Curry. Four more years of this incumbent will have devastating impacts on transparency in government, the continuation of the Curry Crime Wave, and the sale of public assets against the public’s expressed interest like JEA. We encourage all Democrats to make an informed decision in the Mayor’s race and reject former statewide Republican party boss, Lenny Curry.

Special interests and elected officials have tried to make the case that Curry, regularly crosses the aisle, and puts people before politics. Democrats reject that false narrative, and in fact, nothing can be further from the truth. Bi-partisan leaders don’t remove opponents from city boards, bully and demand loyalty from public officials, and reject calls for transparency.

For this and so many reasons, the Duval County Democratic Party opposes the re-election of Lenny Curry and encourages all Democrats to participate in the Mayoral election and vote for a candidate who best aligns with Democratic values.